I really enjoyed how the scorching drought of June killed off all the grass, but the garden could have used some rain (and a less intense heatwave)

Quick summary update on our first year of gardening in Wassaic:

1. Brassicas
I planted three different vegetables in the brassica family, two of which I actually enjoy eating. Of course, those two did absolutely nothing while the cabbage produced head after head of gross produce.

Due to a bit of a mix-up in the seedlings11, I had no idea which plant was what when we transplanted them into the garden. I figured it would be a fun surprise to see what each produced – and it was, until it was clear that the answer was going to just be “cabbage”.

The cabbage did great, though. Sergiu was very happy and repeatedly stunk up the attic making several batches of sourkraut.

2. Carrots and Salsify
Carrots did great, salsify maybe did four plants – not even enough for a mini-casserole-for-one (one=me). So instead of harvesting it, I’m leaving it in another year so it can produce seeds (I hope).

Carrots are delicious and plentiful – but very stocky. That’s what happens when you don’t really dig down and loosen the soil more than a few inches in your garden bed. We’ll add some more loose soil on top next year, and I will likely invest in borrowing someone’s rototiller.

Also, the goats love the tops. Unrelatedly, Elliot has grand plans for all the wild carrots we dug out of the potato patch.

3. Spinach and Sugar Snap Peas
I’m not really sure what happened with the sugar snaps; they were our first crop to produce anything edible, and they were delicious, but they never produced a whole bunch. I probably should have been more careful about the trellises3 I placed for them to climb. Next year, I’ll plant those climbable things at the same time I’m planting the peas themselves.

The spinach was another casualty of the June heatwave/drought, and by the time it got anywhere near ready to harvest, the 90 degree days prompted all the plants to bolt4. On the bright side, I found Google to be completely full of crap when it told me that spinach no longer tastes good after it bolts. I actually managed to harvest a decent amount of the stuff and we made some delicious eggs with spinach and feta (or whatever other cheese I had in the fridge). The kids both loved it5, and I didn’t detect any sour/bitter flavor that Google claimed bolted-spinach contained.

So, at least when sauteed/cooked with eggs and/or feta (/various cheese), bolted spinach tastes awesome. The best part of the crop is that you can continue to cut it and it just keeps growing. Cut the large outside leaves, and the rest will keep growing more and more through the season.

4. Onions
They were soo promising when we planted them – almost immediately little shoots of what could easily be mistaken for grass popped up in neat little rows. They grew and grew and were looking great! Everyone was excited6.

Then that ridiculous late May freeze came — not frost, freeze –with snow. Onions can handle a frost or two, but apparently 27 degrees + snowflakes in mid-May is too much for them. They all died.

Five or six popped back up and, though they got a very late start, seem like they are producing a few onions for us. But overall, that freeze ruined it.

5. Garlic
The garlic did pretty well – but it would have done better if I’d known earlier7 to cut the top bulby things off (apparently called “scape”).

Apparently those top chinese lantern-looking things (which I didn’t get a picture of) suck all the energy out of the plant and keep the cloves from growing, so we had a few very small, half-formed garlics until I finally remembered to chop off their heads.

After that, they did great and we got enough garlic to feed Sergiu for about a day and half.

6. Tomatoes and Peppers
I definitely thought I had killed off most of my tomato plants by setting them outside too early one day back when they were all just seedlings. On the bright side, I was wrong! Our tomato crop was excellent (and oh so delicious!), and we got so many for several months that we kept accidentally letting some of them go to waste!

On the downside, it was the Peppers that I’d actually killed off. Maybe four or five seeds sprouted after the massacre, so those were transplanted into the garden but got a very late, weak start. I think to-date we’ve harvested maybe two — and they were pretty pathetic. A few more are growing (or not – they might just end up being miniatures) on the plants, so we’ll maybe hit five total for the year (if we’re lucky).

7. Corn
My corn stalks (some of them, anyway) are actually doing really well. But something keeps eating all my corn before I can get it picked!!!! It kind of looks like something with fingers is opening the husks, but honestly closer inspection suggests it’s somehow the bugs that are doing it. I don’t know what to do, but we are all very sad. Saurominy (get it?) gave us one delicious ear we could eat, but I think the rest are a loss.

Anyone with any information on what it is that’s eating my corn (and how I kill it!), please comment/message me! We’d like to try again next year, but I’m not going to bother getting cut up by the saw-like leaves if there’s no hope for a harvest.

8. Squash
Man I was lazy about the squash.11 We only planted one type8, and only got 5 total plants to pop up (we probably planted like 15 or 20 seeds…but super lazily) sometime toward the end of June (aka, super late).

Definitely didn’t think they were going to do anything, even when by July 27 five plants had sprouted but not done much else:

So far I’ve counted 7 or 8 long-neck pumpkins sprouting out of the female flowers (almost all on the south side of the patch… sun-exposure maybe?)

If they keep up this pace (and we can avoid an early god damn frost/freeze!!!!!), we’ll be rollin’ in pumpkins. Which means we’ll be reveling in pies all winter long.

Fingers crossed the temps hold out long enough for the stupid things to grow and ripen!

9. Potatoes
Saved the best for last. Have I ever mentioned how much I love potatoes?

Our potato plants did pretty well, but honestly I was a little disappointed in the number of tubers each produced (maybe 4 or 5 at most?) …not horrible, but certainly not plentiful.

Some of the plants are actually still alive and kicking – we’ll leave them to multiply until it looks like that freeze is imminent. My current theory is that they are actually from ones we didn’t pull out soon enough, so they are completely new plants.

But it might be because they were irradiated by some undiscovered gamma radiation and mutated into immortal potato monsters while underground.

I don’t know what kind of radioactive waste is buried under my house, but the potatoes were obviously exposed. Oh well – they are adorable and delicious and I have been enjoying eating all of them. Much like the garlic crop for Sergiu, our entire potato haul (maybe 10 or 15 lbs in all) should be enough to keep me fed for about a day. And maybe they will give me super powers!9

In summary, that’s about it. I think I forgot all about the strawberries11 and they died. Also killed a bunch of cherry and apple trees. And various other trees.

The mint is doing okay, and Liz gave us all sorts of tips on the edible wild plants growing around our property10.

I would like to try to get some fall-plantings in so I have less to do next Spring (I think Garlic is the main one – we can plant it in like October or something and they’ll be ready to sprout in April!), but I will probably forget11 and then be scrambling around come March/April to get it all ready.

Overall, not a bad first go at gardening. Definitely cost us more in seeds/dirt/time/effort than it saved us in grocery money, but fresh vine-ripened tomatoes and same-day-dirt-to-stove potatoes are totally worth it.

1 Still have no idea which is which for most of the plants.
2 Two of the stupid things did produce miniature brocolli trees in September, but I was hoping they’d get big enough to actually require chewing, so I waited to harvest and then they turned into flowers. I figure maybe I’ll harvest their seeds so it’s not a complete loss. 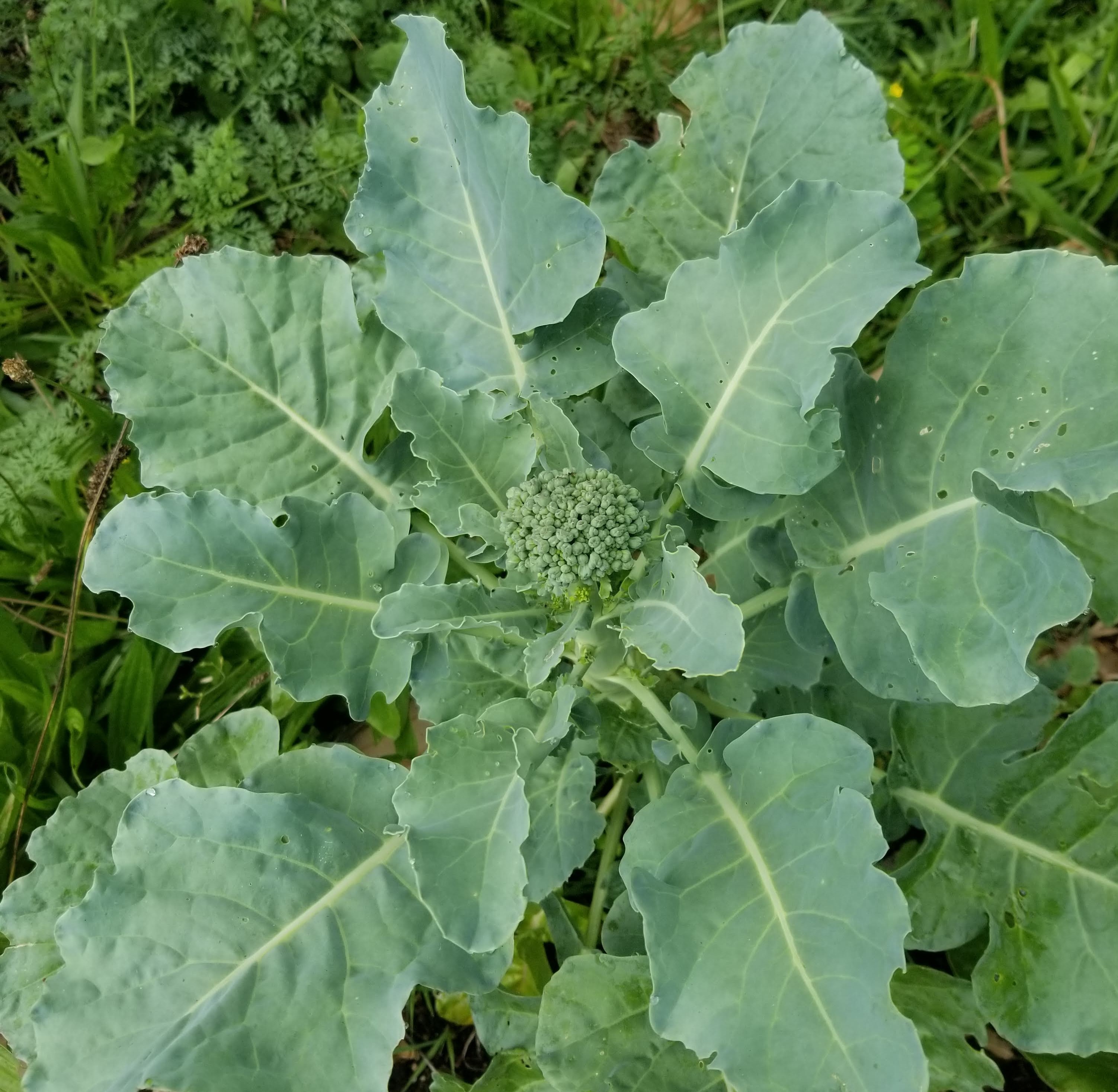 3 AKA sticks. Of vastly varying quality.
4 Which is, I’ve learned, the word for when spinach starts to flower/turn to seed.
5 They loved it so much that I barely got any. Stupid delicious food everyone loves.
6 I despise the texture of onions, but there are a few things I like them in. And Sergiu and Bridgette are both huge fans, so I was mostly excited for them. Aren’t I selfless? :p
7 Liz actually told me pretty early, but it still took like 3 weeks for me to actually do it. So more accurately, they would have done better had I gotten off my lazy forgetful butt and actually done it earlier.
8 Not 100% true – I guess Sergiu threw a butternut squash seed in my cascading garden bed somewhere, and it came up too. But only produced one female flower, so it looks like we’ll just get one (nice sized) squash out of it.

9 HULK MASH!!!!!(ed potatoes)!!!
10 Lamb’s Quarters is the only one I remember, and we haven’t tried it yet – supposedly it tastes similar to spinach, so I really need to give it a shot!

View all posts by as1neth

One thought on “Gardening Update – September”

All posts, month by month