It’s a stressful time, so we’ve got to celebrate the wins when we get them.

As you may remember, we are (very slowly) preparing the kitchen for renovation, and this necessitated the removal of a built-in cabinet/drawers thing that acted as a wall between the original kitchen and the mud room (prep room? laundry room? random extra room?).

Originally, I kind of hated taking it down because it seemed to be an original fixture, well-made, sturdy, etc. But as we started removing it (bit by bit, as carefully as possible), I grew to hate it.

It was just bizarre!

Bits of it seemed well made, others seemed tacked on and shoddy. And somehow built into either previous house renovations, or into the original design itself (but again – so mindblowingly badly that it seems impossible to have been part of the original structure – which is generally well-made!)*

We made some good progress early on, but it all came to a halt when we discovered how difficult it was going to be to salvage the entire structure due to all of the odd ways in which it was built into the space. My internal battle (complete with external monologue, much to everyone’s annoyance) raged on for a few months but I finally got so annoyed by the sight of it that I gave the go-ahead to tear it out as carefully as possible… even if it meant a bit of destruction.

The first step was that crazy giant board that they somehow managed to install through the floor itself; the one that protruded a solid 12-14 inches into the basement.

I’m happy to report that we managed to extract it (still not sure how we did that…) without too much damage to surrounding everything.

After that everything went pretty quickly. Elliot ripped off the facade of the drawers very gently (will definitely be able to reuse/rebuild), and we got all of mix-matched bits of sides and backs out with minimal damage (will reuse the wood – we’re not rebuilding the loony bits!)

We even cleaned up after ourselves and for a hot minute had a pretty cleared out kitchen/mudroom space.

Best part? All we technically did was remove a cabinet – nothing remotely structural (no matter how hard some parts were trying to be!), so we doubled the size of the kitchen space without having to demolish any parts of the house itself!

The second septic pipe (or, as they are more alliteratly known around here, “poop pipes”) got clogged up while the kids and I were gallivanting around Europe** Elliot temporarily fixed it, but that temporary only lasted a month. So with six people in the house, we are currently down to one attic bathroom.***

Judging by the location and direction of the second septic pipe from inside the basement, and the presence of a second septic cleanout pipe/cap in the yard that was roughly in line with the basement end of it, Sergiu and Elliot started digging out the trench.****

They hit rock after rock, boulder after boulder, and just kept digging down. Eventually they found a crushed section of the cleanout pipe, and a little lower yet (almost 6′ down) they found crushed sections of a pvc pipe that we all assumed was the septic line.

Can you guess where this is going?

Well, if you guessed the pipe was going to the septic tank, you’d be as wrong as us. It essentially went nowhere. And as it was crushed (seemingly by all the boulders that were possibly placed/dropped around it as ‘fill’), we really don’t have any idea what it is or what it did.***** Current theory is that it is an old septic line that went to an old tank, but we will probably never know.

Everyone lost a little steam after this: they’d spent days digging out what we all thought was the pipe we needed to fix, only to find that it was something else entirely. So much wasted energy!

Eventually Elliot climbed back into the hole to battle the bugs and the boulders, and started some exploratory surgery (digging) to the west.

Hope was renewed when he quickly found another long cylindrical-ish object that was generally in the correct position.

But alas… twas an inexplicable (and indeterminately long) piece of lumber buried over a foot underground for no apparent reason.

So he dug some more. Hoping every shovel-full would lead him to a pipe filled with disgusting waste.

And eventually it did!!

(spoiler: this is the ‘victory’ of this story – no other real progress, just that he finally found the pipe!)

It was crushed in multiple places and in truly terrible shape. And attached to a really old-style pipe that I really wish we could replace the length of – but we can’t, so we’ll cut as much away as possible and hope for the best.

So he started digging again to clear out around the entire length of the gross pipe (the entire north yard looks like some demented WW1 general was in charge of landscaping).

Sometimes he did this in the rain, most of the time he was shirtless,*^ and always surrounded by gnats.

And in the process, he found…

Finding secret/hidden things is almost always a victory in of itself, and this one may actually prove useful. Elliot and Bridgette uncovered a bit secret sidewalk under about 2 inches of dirt and grass – up until that moment, it looked just the same as every other bit of the yard.

Aside from being dirty, it actually seems to be in pretty good shape (way better than the rest of the concrete-based things around the yards). They’ve only uncovered about 4 feet of it, but seems like to go from the porch to the house (or the driveway).

But then we noticed the giant chunk of sidewalk that has apparently been sitting in the yard since November (that none of us noticed for 5 months!) that the septic folks clearly removed and set off to the side when they replaced that other pipe.

So maybe it does go the whole way to the somewhere (once we put that bit back in).

We’ll excavate it and see where that somewhere is (after we replace the stupid pipe… priority is clearly to make the 2nd bathroom functional again).

I’m grasping for victories now, but I don’t care: this totally counts! I gathered up all of my wine*^^ and set it on some shelves in the basement. It was fine – it looked fine, worked fine, etc.

But Elliot had a better idea and relocated them all to the built-in brick shelves that were added at some point next to the basement portion of the chimney.*^^^ Now it looks way better and I’m claiming it as a win.

Plus, it gives me an excuse to go buy more wine (I have to fill up those shelves!)

My hoarder instincts*^^^^ again served me well (see above, re: wine) and, scattered among several boxes, we were able to find all of the parts we needed to hook up the original NES.

This was harder than it should have been because the TV has no input option on the device itself, so we also had to find one of the universal remotes and then find the code for the 25 year old TV. But victory was ours, and we reveled in our earned spoils!… … … which was roughly 45 minutes of trying to get the NES to work.

But then it did and we really appreciated our tri-force-rific reward!

Things take a long time. And a lot of effort (even when it’s not *me* making the effort (thanks again, Elliot and Sergiu!).

I have to constantly remind myself that it is okay that nothing ever gets done, and try not to get too pessimistic about whether or not things ever will. Drink some wine, Zoom with some friends, play some games, and celebrate the small victories. Preferably with celebratory wine.

*We’ve created an imaginary family on whom we are placing all the blame for the stupid/confusing/poorly done bits of renovation or design. The McCarthy’s (name inspired by Joseph, not anyone I know personally) made some weird choices, and executed them poorly. Damn you, McCarthy’s!
**Back when we were allowed to do things like leave the house and gallivant.
***Which is on the septic pipeline we replaced back in November. I’ve said it before, and I will say it again: thank god for redundancies!

****Bless their hearts… but more importantly, bless their testosterone-filled muscles.
*****More accurately, “was”, as it is so crushed and degraded that it certainly hasn’t been performing any useful function for several years now.
*^Bridgette and I are trying to figure out a why to make some money off this – paywalled livestream with add-on options for shirtless, windy, hosed-down, etc. We should probably get Sergiu’s consent, as well. Double the profits! (see below, he’s posing/flexing specially for you!) 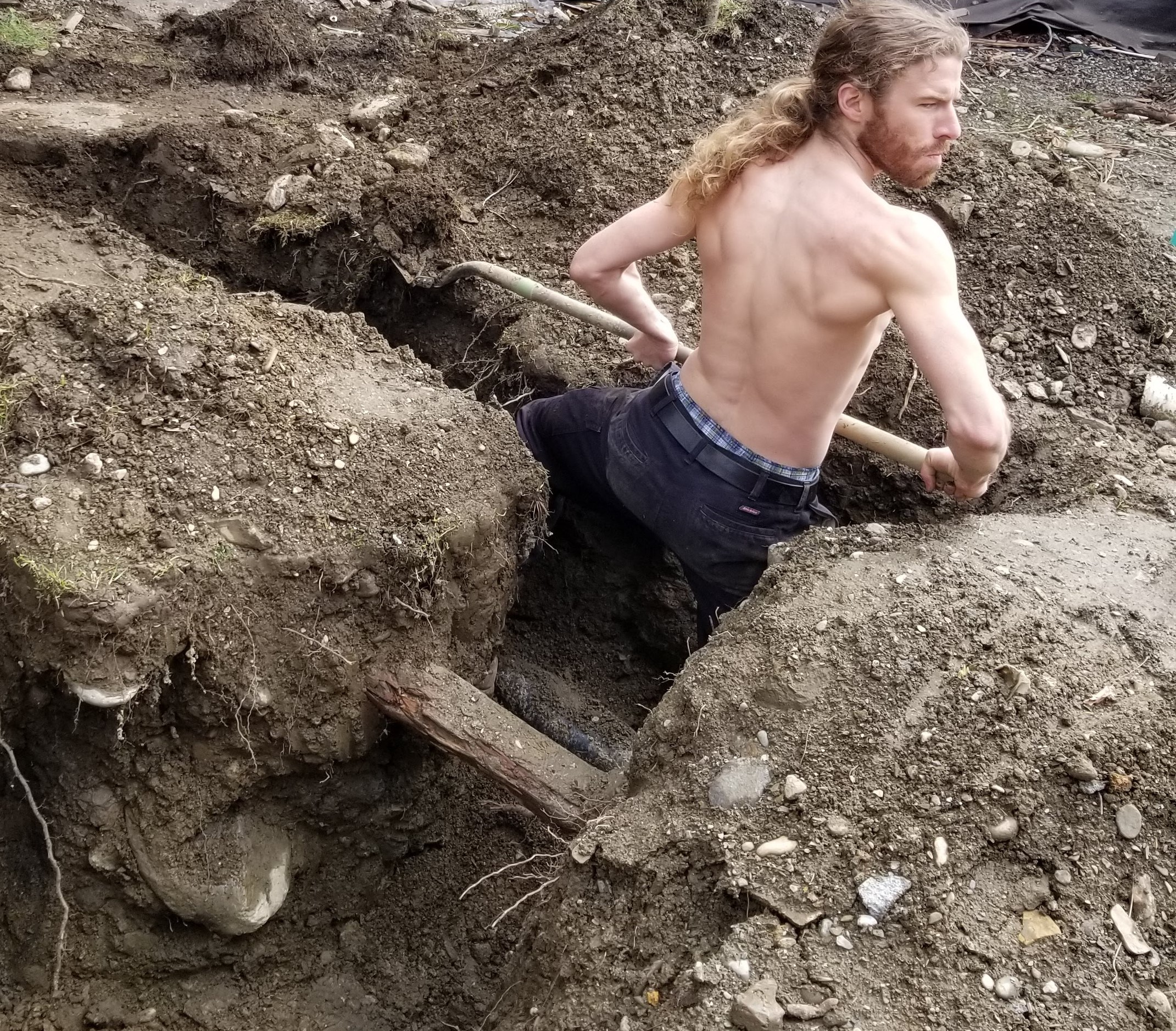 *^^ Including a bunch a bought as a hoarder when it looked like the shops might shut down – thank goodness alcohol stores are essential shops during quarantine!
*^^^Clearly not the McCarthy’s addition, but some other (real or imaginary) family that made *good* decisions and did *good* work.
*^^^^Full list of things I have hoarded because of COVID-19: Little Debbie’s Snack Cakes, Mr. Ed’s Candy, cereal I ordered online from Target, and a variety of red wine – mostly from the Minervois region of France. And dish soap, but entirely by accident. We ran out and tried to buy some at the store but they were out, so I added it to my Amazon subscribe & save for March. But they were out, so it was back-ordered indefinitely. So I ordered some from Target. But it was backordered with no eta. So I ordered a different supposedly more organic/natural type that I’d heard about. Well, they all arrived today and now we will never run out of dish soap ever, ever again.

View all posts by as1neth

All posts, month by month